Posted on March 26, 2022June 5, 2022 by admin1
ABA dancers perform the wedding act from the ballet Paquita in the second act original contemporary and character choreographies 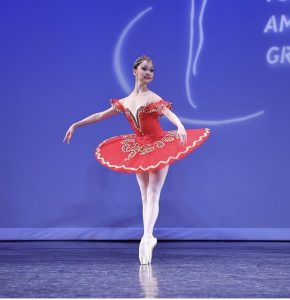 Akhmedova Ballet Academy will be performing excerpts from the ballet Paquita for its spring production. In full, this ballet is about a Romani girl named Paquita living in Spain. She saves the life of a French aristocrat named Lucien d’Hervilly from Iñigo, a Roma chief sent to kill Lucien. They fall in love, but Lucien cannot marry a lowly gypsy such as Paquita. However, Paquita discovers that she was kidnapped as a small child by gypsies who raised her, and that she is actually of noble descent meaning she can marry Lucien. The ballet ends in a great wedding scene full of joyous dancing.